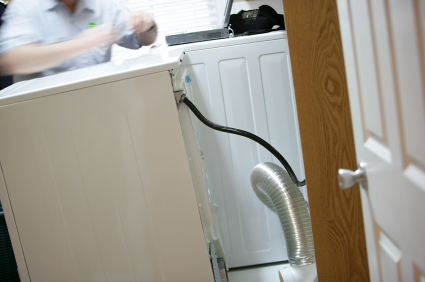 Your dryer has a duct connected to the back of it that typically vertically vents up through the roof. Over time, this duct gets lint stuck inside that builds up over time. This lint is very flammable and is often the cause of house fires.

It is important for the safety of your home to clean out the lint in your dryer duct to remove this dangerous situation. Remove lint from dryer exhaust duct will remove any hazardous issues affecting your home.

This task will require a special dryer lint brush that has a long flexible cord attached to it. S so you can insert and pull out of the exhaust duct and probably a vacuum cleaner.

Use the lint brush inside the dryer itself by inserting it into the lint trap. Disconnect the flexible duct from the back of the dryer that is attached to your wall. Once removed, clean out the lint. The opening in the wall will vent out through a pipe to the outside of your home. This could be a long run, so you will want to use the lint brush from both the inside and the outside.

You could also use a shop vacuum in the blower mode to try and force high speed air through the duct to get lint out. You can also attach your shop vacuum in vacuum mode on one end. And use a brush from the other end.

To remember to conduct this task regularly, use a maintenance calendar to remind you.